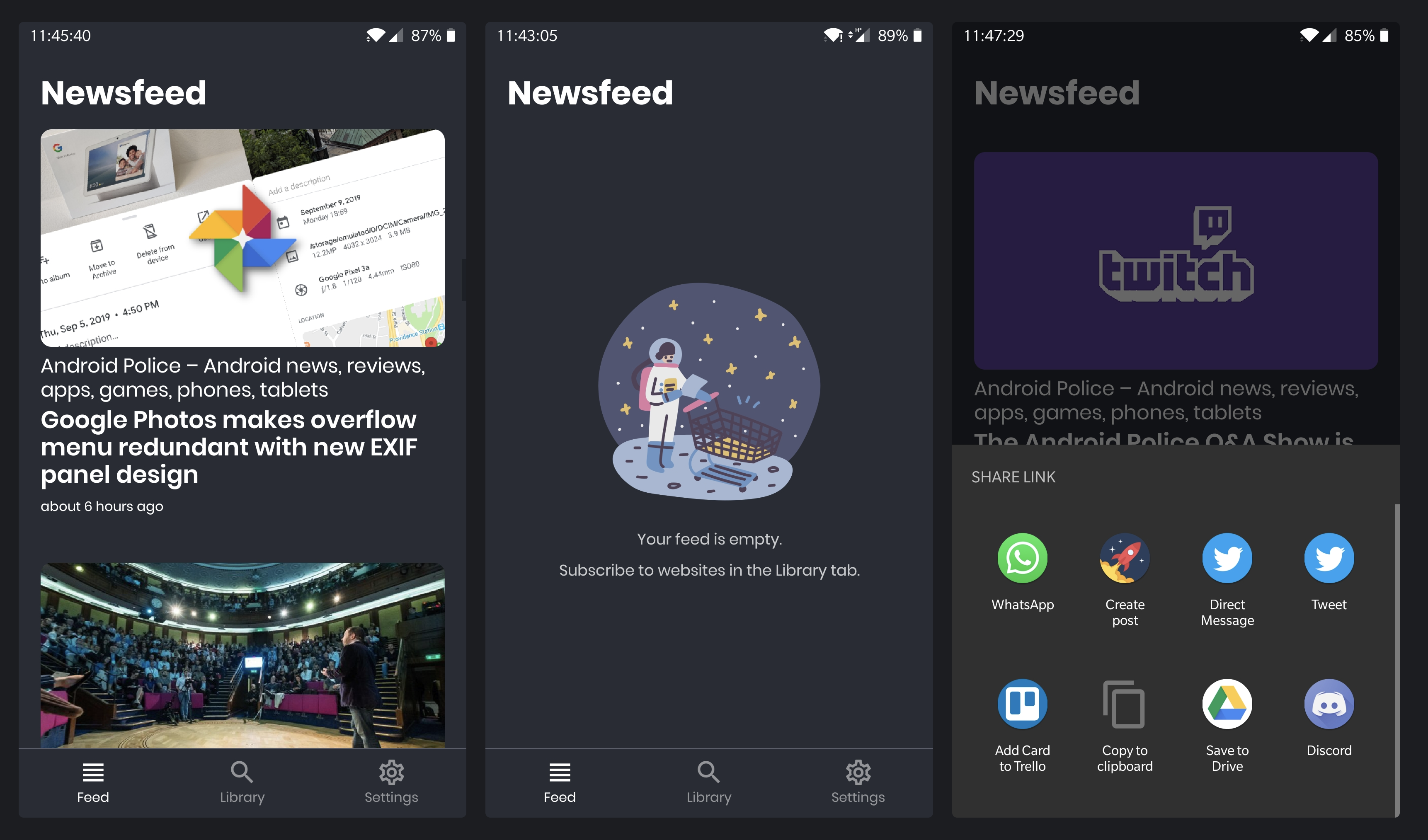 Coding was a hobby before it became a way to pay the bills. I was always motivated to make something that was missing or to replace something that was a shitty experience to use. That’s pretty much how Newsfeed was conceived. But some time after publishing to Google Play Store and keeping track of friction I encountered with the app myself, there was one that just had to be prioritised for me—making it easier to use the app at night.

Dark mode all the things

Dark mode has become seemingly more popular in user interfaces these days. Dark themes were my go to for code editing, but now it’s found its way into mainstream use like YouTube, Android 10, Mac OS and even the old Windows File Explorer.

There’s even a new CSS media feature prefers-color-scheme drafted so that websites can switch to a dark theme if the user has set this at their Operating System level. This is great for when your computer is themed all dark and opening a web page no longer blinds your eyes, but it’s up to the web developer to use, so until then there’s still third-party extensions like Dark Reader for Firefox or Chrome.

Now while dark mode is great for someone like me, with glasses mitigating eyesight issues and working mostly in the dark, this isn’t for everyone. Whether its personal preference or differences in eyesight, light themes still have their place, so its important to be inclusive and provide the choice.

Without touching a single line of code, I fired up Figma and added a mock up of dark mode along with the other crazy future ideas I was investigating. 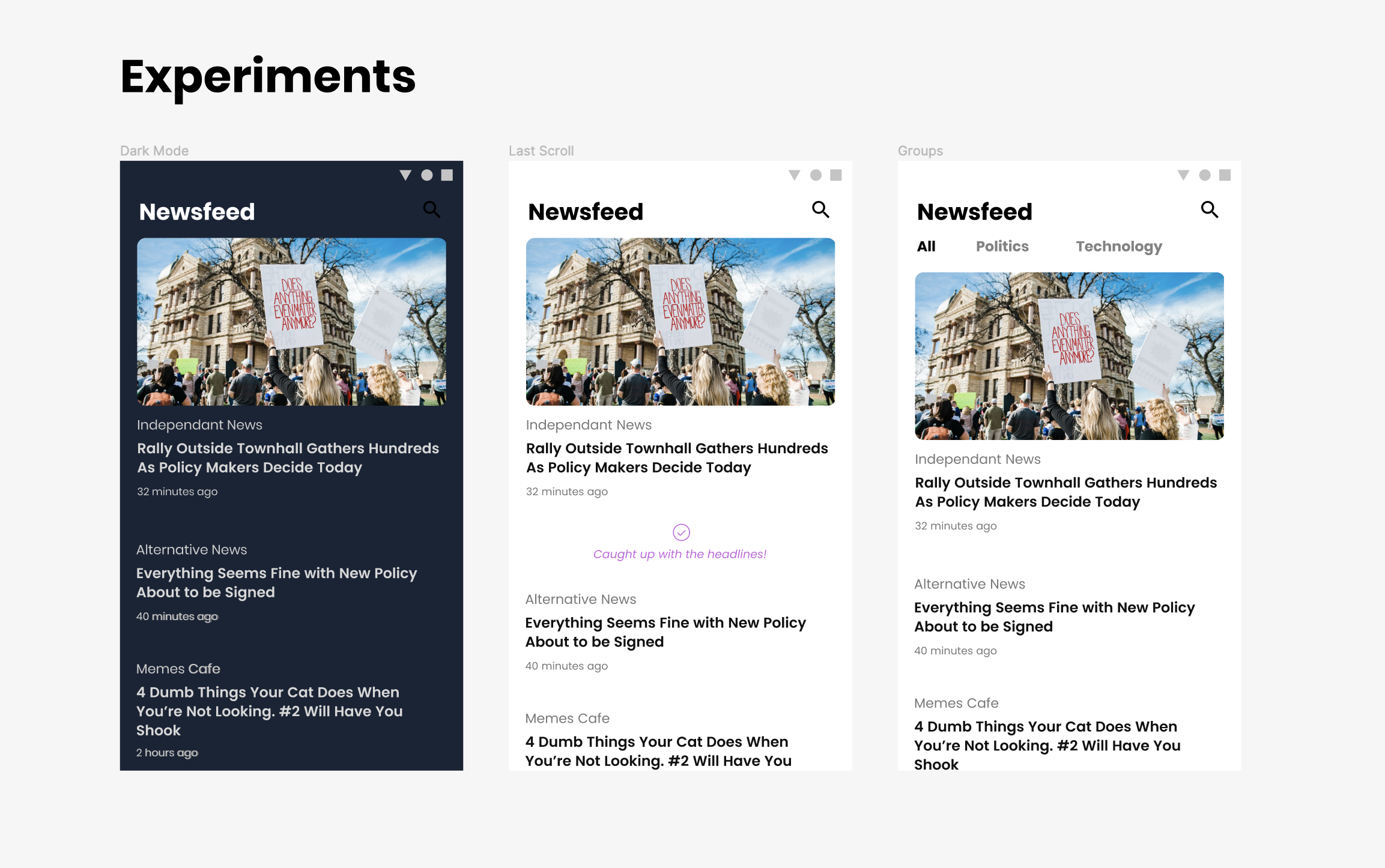 Mockups of future ideas including dark mode, marker to indicate last scrolled to position, and groups for various feeds

That looks easy to implement, just change some colours right?

Nav bars have been a thing in iOS for ages, but only became ‘standardised’ in the second iteration of Material Design in the Android world, having originally prioritised swipable “drawers” hidden behind hamburger menus. Navigation bars at the bottom of the screen are incredibly useful, they’re much more ergonomic fitting perfectly within the Natural Thumb Zone and giving situational awareness of where you are, and where you can go.

Bottom navigation bar for Newsfeed with buttons to go to Feed, Librar and Settings

Ok so this was pretty simple, just add a new screen and when navigation goes to settings we conditionally show it. Expo’s AsyncStorage made storing settings insanely simple. It was also a great place to put links to things like image credits without cluttering the main screen. 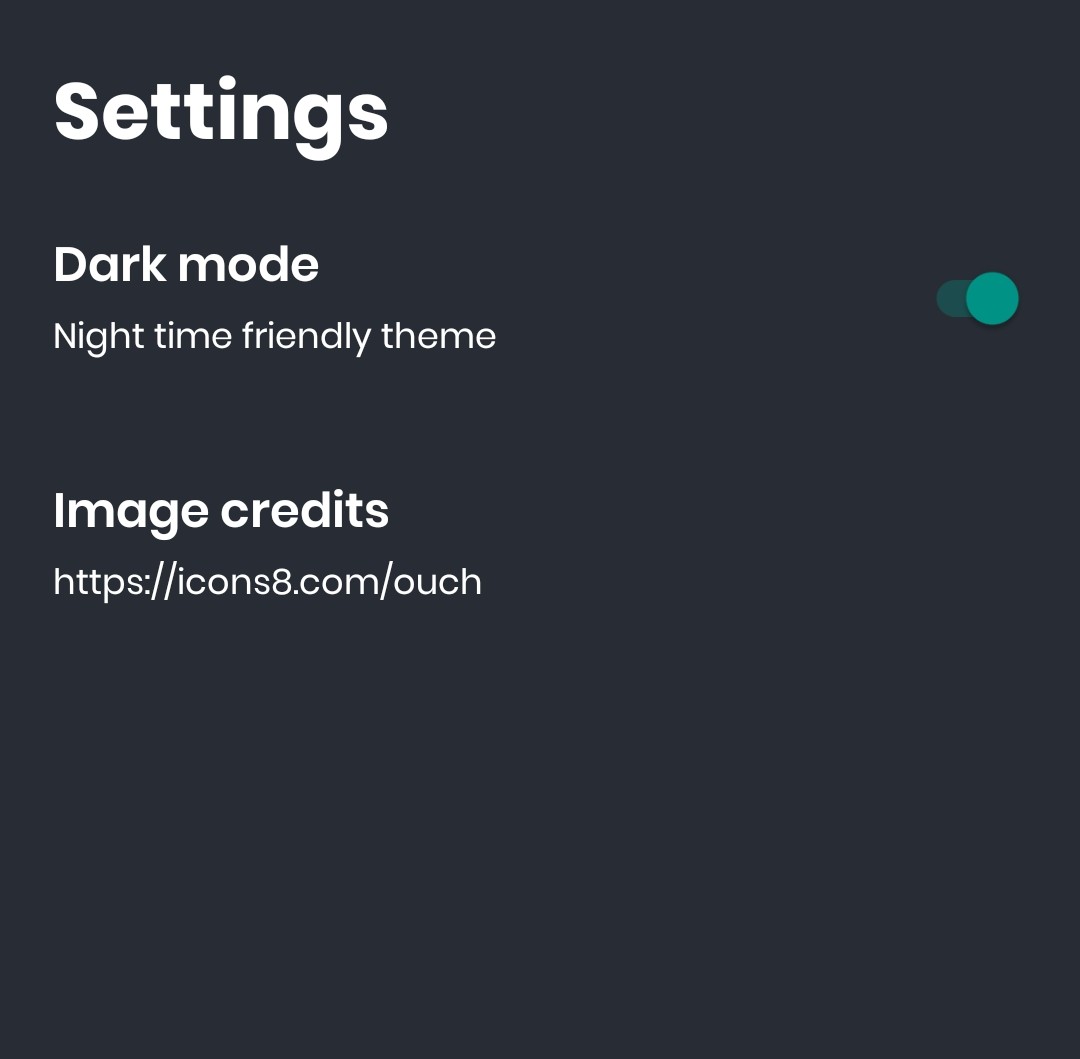 What else is new?

I was able to better organise my ideas and bugs I ran into in the public issue tracker, and one item that stood out that wasn’t blocked by anything else that I wanted to pursue next was supporting subscribing to Atom feeds. Right now Newsfeed only subscribes to plain RSS. 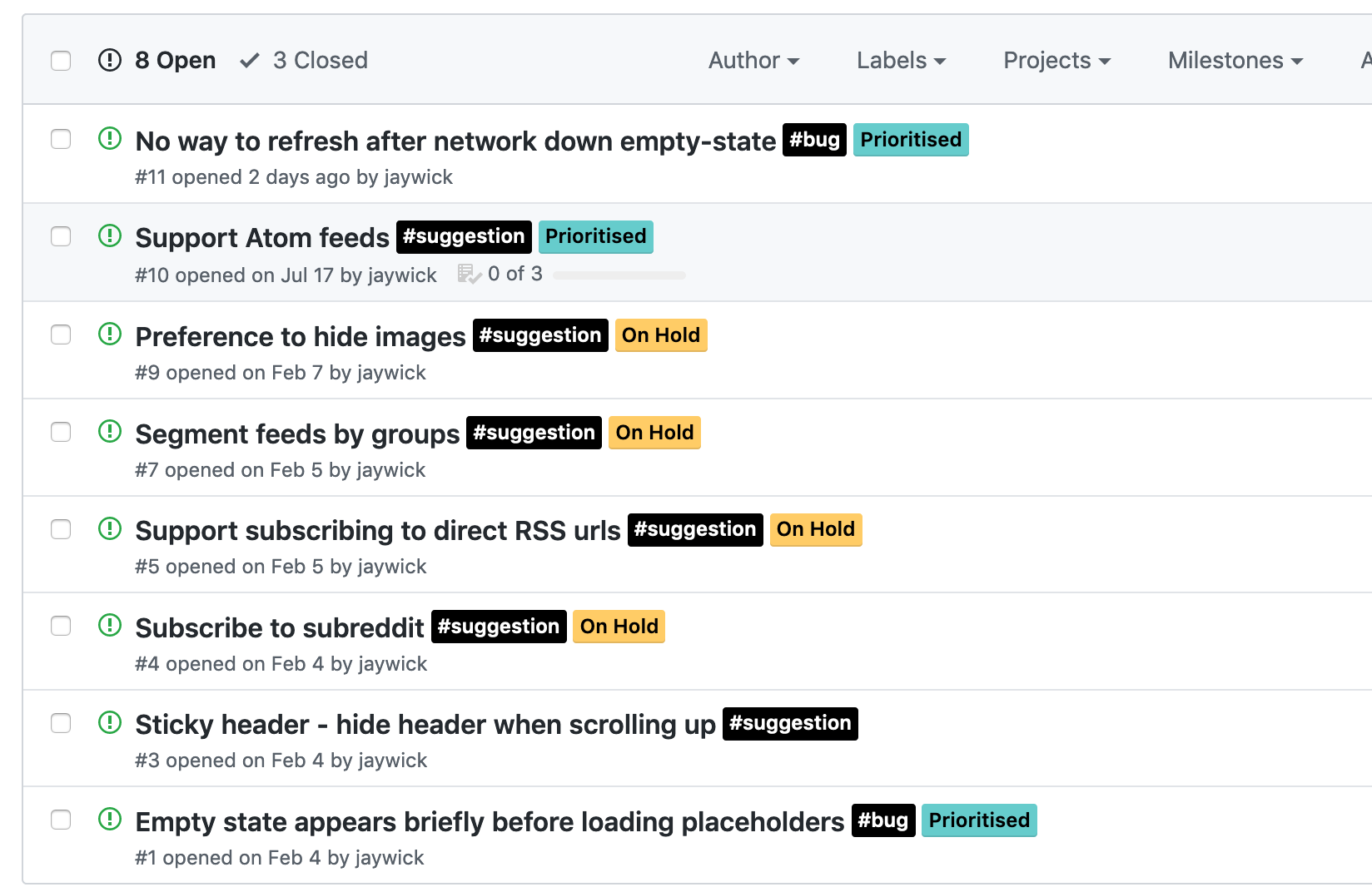 GitHub issues page with ideas, suggestions, and bugs. Items are shown to be on-hold or prioritised

So checkout Newsfeed on Google Play, it’s free, no IAP, no ads – and leave your feedback here!

Under the hood, a lot changed in terms of state management. I was using Redux and its boilerplate was becoming a little tedious for my liking. At the same time, at work they announced an in-house state management library, react-sweet-state which was meant to take the good parts from Redux and yet be more nicer to use. What better way to experiment with this than on a personal project?

My reasons to move away will be totally different to someone else’s, but my reasoning was pretty rudimentary

I would recommend giving it a try if you have any 20% or hackathon time though, and will blog more about it the more I use! 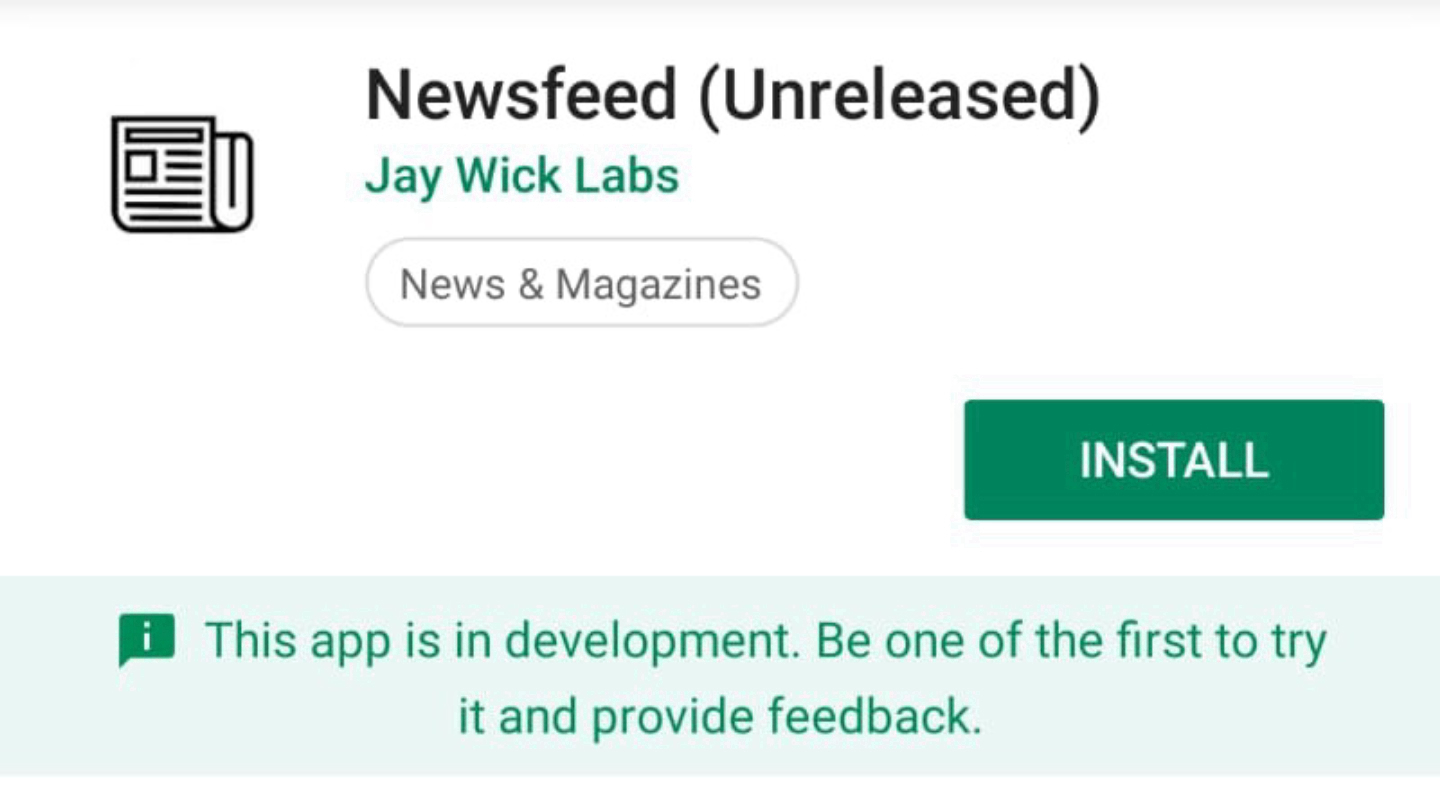 A couple months ago I blogged about starting a project called Newsfeed. After six months of coding during my commute ... 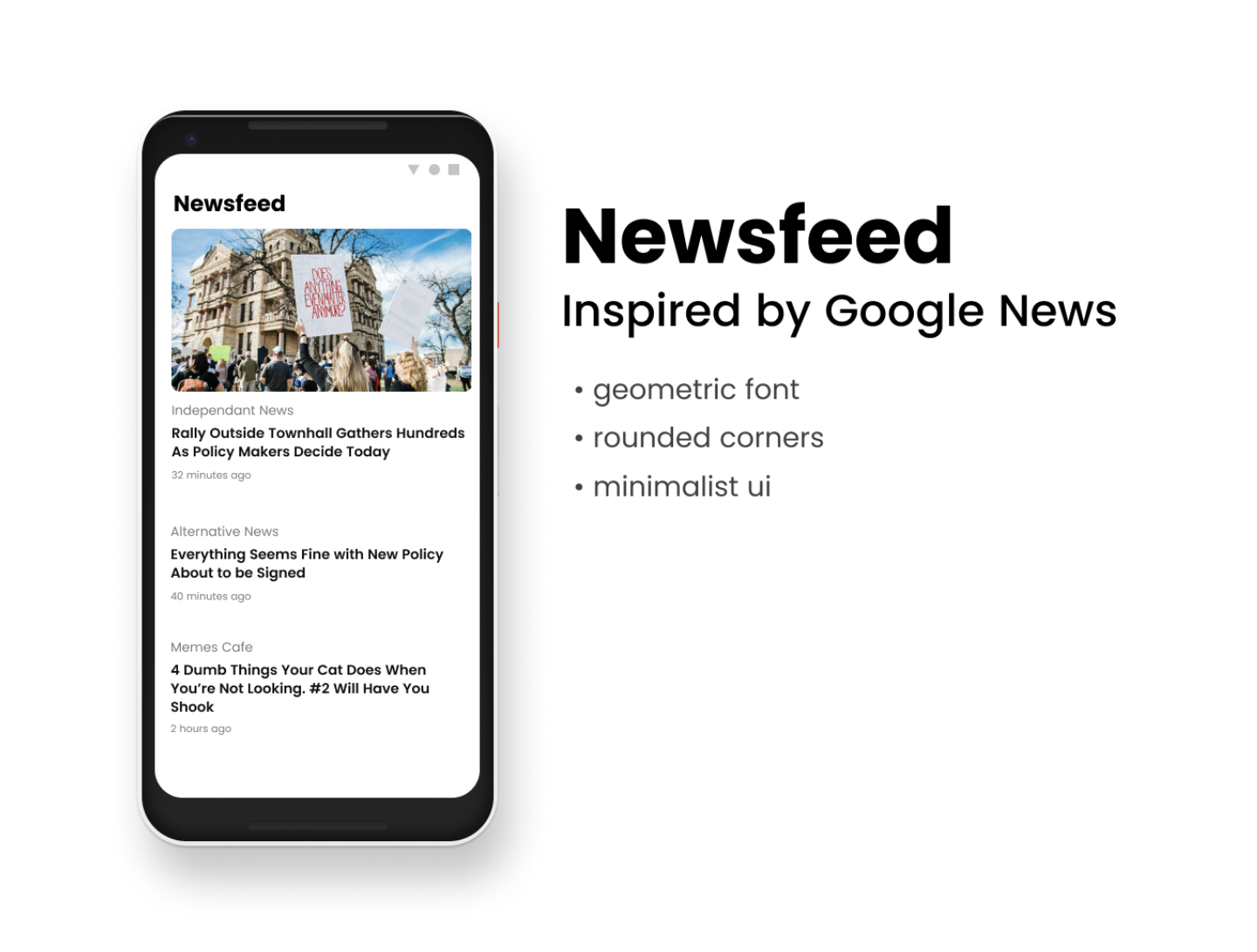 In the spirit of experimenting all the things and a personal yearly goal of focusing more on designs, I started work ...